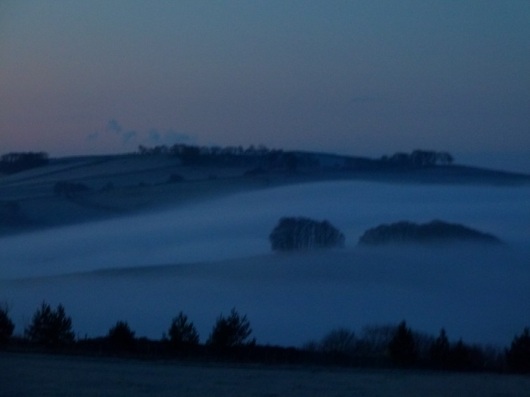 For Pramila nothing’s changed, or so it seems. The sky above is bathed in the same golden brown hue that she’s been seeing for twenty years or so. That’s  roughly the time she’s spent, all by herself, in this bare boned one roomed hutment sans any electricity, heating or other discernible appendages of modern living.

Here she lives, in near seclusion, in this quaint old fishing village so far cut off from mainland Bengal that it would fail to show up on even the most advanced search engines.

There she’s out, in the open, under the stars, below the blue skies, her bald head glistening a silvery white under the glare of the half moon. All she sees is the silhouette of the waves; the tumultuous crests and troughs of the high seas reminding her of her own topsy-turvy existence.

Standing there, her frail self a sodden figure in the twilight afterglow, she travels back in time to those halcyon days when she ruled the streets of Kolkata as a gangly fire spitting knife wielding all woman gang leader. Murder, kidnapping, extortion, bootlegging…you name it, she’s done them all.

Pity she ended up in Tihar Jail, the place where they send you when your crime dossier would make Al Pacino look like God’s chosen messenger of peace and love.

In the twilight of her life, does she ever ponder, wonder, or even look yonder?

Honestly, she cares a damn fig.

Been there, done that.  Know what I mean?