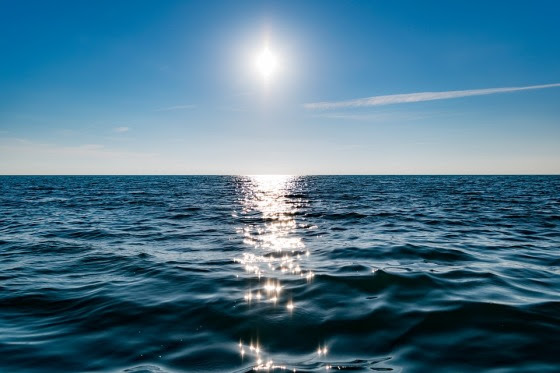 THE SEA, MY LOVER
By Neel Anil Panicker

Most spoke of the low but omnipresent
rumble of water, or its dulcet lap against a hull, but that was not how he missed the sea.

The ones who felt so were  the privileged lot; those fortunate enough to have been born near the sea.
Lucky enough to have had spent an entire childhood and thence, their adulthood in close proximity to the gurgling waters.

Not so—Rajender Yadav. The thirty  something illiterate ‘waiter’ considered the sea his unattainable lover.
Someone distant enough to be seen out of reach yet close enough to be dreamt about.

The past fourteen years that he had lived in Mumbai every since coming new (running away) from his village tucked somewhere in the hills in the upper reaches of Uttarakhand, had been harsh; cruel, if one may add. But, equally rewarding too.

First, the tough part, though.

As a tawny, thinly fourteen year old he had landed, ticketless at Mumbai Central station one bright summer morning of mid-May.

Not knowing what to do, where to go, who to meet, the teenager had spent the entire day simply ambling around the central business district.
As the day died out and night fell, he still hadnt eaten a morsel of food. Very close to fainting, his eyelids all dròoping, his body aching and his mind in neat comatose state, the impoverished boy had just about stumbled his way to the front steps of a hotel before he fell down.

He hadn’t woken thereafter for the next very many hours. The next day, when he regained consciousness, he had found himself in a semi-darkened room.
As he rubbed his eyes, a do it opened and an eldery man of around sixty years walked in, a smile on his lips.

“Don’t worry, my boy. You are ok now. And safe here. This is my hotel. You can stay here. We have a room upstairs for all the staff.  Would you like to work in my restaurant, young man?”

Rajender looked at his saviour and his eyes welled up.

Finally, someone was offering him food, and shelter, and money too.

What more could he say?

He nodded his head and voila! the next moment as if by magic, another boy, roughly of his age, appeared through the door, carrying a plate full of rice and vegetable curry.

“He is like you, a waiter here.  Earns a monthly salary of Rs 5000, lives here, and so do five others. Would you like to join them, my boy?”

All Rajender could do was not his head as he hungrily grabbed the plate and began to devour it of its contents.
He had known hunger. having nor eaten for the past five days, the time it took for him to escape a sadistic step father who not only used to beat his own mother black and blue every single day but also used to sodomise  him as and when his carnal instincts took over.

And so began his new life, a life of liberation, a life of happiness even in sparseness. The young boy overnight had turned around, become happier, more at ease, and more at peace with himself and life in general.

He loved the work, never found anything tedious.
His boss, whom he new everyone addressed as Kaka was a benevolent soul, and always took care of his employees. As his work began only in the second half, after six. he had the entire day to himself.

While most co-workers would to the cinemaz or even, occasionally visit the nearby red light areas to cater to their  biological needs, Rajender discovered he was happy merely taking a languid stroll by the sea.
Or, just sitting by its dandy shores, and watching the frothy waves roll by would give him immense satisfaction.
Unlike others who sat by and watched the bluish waters and found love in other’s arms, Rajender found bliss in the sea. The sea, with her wild wanton ways, her sudden swell and fall, her umpteen crests and troughs  was his lover. He felt she made love to him and him only and when on moonlit nights the waves reached him and left behind their sand filled remnants as they receded back to their watery graves, Rajender felt fulfilled, as if he had attained orgasmic nirvana.

And that’s it had been so far, all the past fourteen odd years since the moment he had landed in the big city and set his eyes on the sea.

So far, until the day the world and it’s nanny got hit by the Corona virus.

As lakhs worldwide got ill with many eithet succumbing or close to dying of the disease, it affected his adoptive city too.
The numbers of the dead, the dying, and the suspected rose, and that also rose the numbers of those who were forced to leave the city.
With no foreseeable future in sight, with the city under lockdown and the all work coming to a standstill, he too had no recourse but to leave.
Leave his city, the place that had given him a roof over his head, brought food to the table, even found him a lover—his sea.

As he stepped out of the hotel and turned around, he looked one last time at the sea waters.

She was still smiling, he felt. She still looked as alluring, as mesmerising as she had seemed the first time.

She also seemed to be telling him, imploring,  begging him. He cocked his ears and listened to what she was saying.
“Please don’t go, don’t depart. Stay here, stay with me. I promise I will take care of you.”

He looked at her, into the sea, his eyes boring into hers.
True, she was beckoning him.
‘Come my love, come into my arms. I will take you to heaven,’ he heard her say.
He didn’t hesitate a wee bit. He walked towards the waters. His feet led the way. A smile lit his haggard face.
It lit his heart.He knew he was about to attain everlasting bliss.
As his feet dipped the icy waters, Rajener felt
an eerie calm he hadn’t felt ever.
He knew he was about to meet his lover, the sea.
For the first time in his life he had attained what eluded him so far—PEACE.