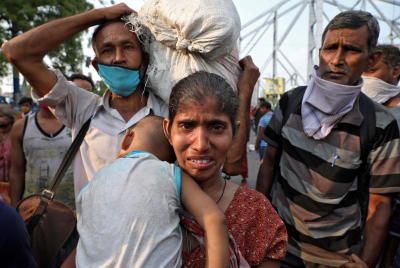 It’s the third day of the nationwide lockdown, and the story of no different.
Dear, uncertainty, anxiety and all other similar gloomy synonyms held centrestage  all through the day.
Speaking of the morning, one welcome thing that I spotted was that more shops, (and by this I mean your neighbourhood pop and mom stores) had opened today as compared to the first day of India lockdown.
Guess it’s something to do with the Chief Minister’s announcement (Some say diktat) that all essential and every day items stores will remain open all through the day.

Well barring this one hurried trip to the neighbourhood general purpose store, life has been spent all within the four walls.
Oh!  there this other thing too.  A casualty of COVID 19 is my daily sitting down with the morning newspaper. An unbroken affair for the past almost three decades, this was rudely broken when the society WhatsApp group announced  ‘No PAPER
ENTER GATE…FOR PROTECTION PURPOSE”.

Just when matters creed dangerously close to a war like situation with a few hotheads from both sides threatening their opposers through liberal use of cuss words as “Health haters”,  stupid fools”, “literate idiots” and a few other unmentionables, the Society President  put his foot down.
“OK…ENOUGH…NO PAPER, NO GATEWAY…PAPER PORES FULL OF VIRUS…INTERESTED WATCH TV. PLUS WATCH GROUP…FINAL!!!,”

And that was it! This decided, no newspapers come within a three mile radius of our colony.

So, it’s more or less the TV, and if course the world wide web.
And all the watching, reading and hearing of happenings from around the world today has brought in only bad news.

Yes, it’s a stark harsh truth that even after two full days of an ALL INDIA  LOCKDOWN, neither have the number of deaths reduced nor has there been a drop in the number of fresh COVIDV19 cases.
If that is not depressing enough, then watching hundred and thousands of impoverished daily waters and their families including little children and baies, some as as young as three months hit the road is indeed a sight that tears the human heart.

Reverse migration is happening all over the country. The poor, the landless, the labourers who had come to the big cities are now walking back (Yes, you heard that correct!) walking back to where they cane from. Television screens all through the day beamed images of families upon families hirrong the road, clutching nothing but a bag or two, women and children in tow, all making the long ardour trek back to their far flung villages, many over 500 kilometre far, a bare footed journey that would take them no less than a week or more.

“What can we do? Whose afraid of Corona? If the government turns a bling eye to us then we will surely die, if not of this virus then surely of hunger, ” spat out a middle aged woman, her face barely visible, covered as it were in flimsy veil.

Such sights and more. each more horrific and heart wrenching than the other is the reality that is unholding bybthe hour all over this over  billion  and a quarter lakh populous country.

Finally, as i curl up for the night, I  wonder what macabre turn the coming morn is going to take—will it be the harbinger of new hopes, or will we see the world plunged further into this cellpool of medical madness?.
Its a question whose answer every single person on this Planet must be desperately seeking to know.