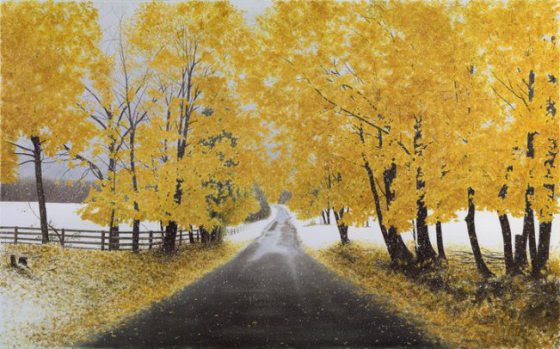 The most peculiar thing happened on the eleventh of November, just as the snow had begun to drift down. The first inkling that something wasn’t right came the moment Alicia slipped out of her hill top cottage for her usual trudge to school at seven in the morning.

Unlike on the other days, the air that day was more biting, a stronger Westerly breeze having escaped from the distant hills had drifted towards the East, blowing in its wake the large conical branches of the sky high deciduous trees, their leaves falling over the single line pathway that led to the village.

She noticed the golden carpet of fallen leaves and smelled the redolence that they emanated; that, combined with the smell of earth that had mated with the rains of the previous night, rent the air with a heady feeling___an unusual fragrance that reminded her of none she had experienced so far ever since she had moved to the hills as a twelve year old a couple of years ago.

Her spirits suitably buoyed, she began to lip sync the latest Beyonce chartbuster that she had heard on the phone of one of her classmates in the bus that brought them back from the school.

It was at the turn that sped away from the main arterial road that spun off into her village that she noticed it___the hand, a human hand, a human hand and then when she strained her neck backwards, the head too___smashed a reddish pulp.

Her first instinct was to scream out and that’s what she did.

But the words, they died, even before they reached her vocal cords.

She screamed even more, in fright, in shock, in delusion___the words just didn’t birth.

By the time she found her voice, she had forgotten why she had screamed.

It was as if the particular incident had not happened at all.

And by the time the bus had dropped her off at her usual stop, and by the time she had reached her cottage, she had forgotten everything, forgotten the fact that she had ever seen a person’s hands and his (or was it her?) head smashed into pulp.

Little did Alicia know that such an occurrence would be a recurring feature for the next four months.

She would be seated and looking outside from her corner left bus window and sighting the same gory thing over and over again and the by the time she had reached her stop, it would be completely obliterated from her memory.

Little did she know that her nightmares had just begun.