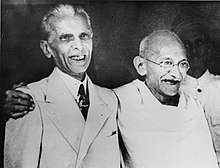 Are we going Pakistan’s way? Are we becoming a mirror reflection of what Pakistan has become in recent years?

By focusing our eyes, ears and all of our sensory perceptions on our next door neighbour are we in real danger of morphing into the monster that Pakistan has turned into?

Well, if you were to ask me I am going to stick my neck out and say an emphatic ‘Yes’.

Chew on this___Ram, Padmavat, cow, beef, Taj…we seem to be never falling short of issues to fight over. Almost every other day we are out on the streets, armour and shield, guns blazing, ready to attack and maraud and exterminate vile enemies of the nation__be they real or imaginary.

The goal posts keep changing, the game remains the same, the spectators ever on the rise.

The latest in this year’s edition of the IPL- acronym for the great Indian Political League__is the absolutely farcical and totally unavoidable brouhaha created over Mohammed Ali Jinnah’s portrait.

I am of the firm opinion that all those students and their political Godfathers who are crying themselves hoarse and fighting a pitched battle in a bid to force authorities to remove Jinnah’s portrait from the precincts of Aligarh Muslim University, are anti-nationals.

Yes, you heard that__these lumpen hooliganists, this fringe group of pseudo nationalists who indulge in violence and fight over non-issues, who go about brow beating and attacking all those who oppose them including the police and all right thinking citizens of this great country__they all are anti-nationals for in this 21 ist century post liberalised highly competitive modernist economic world that we live in the only rightful definition of anti-national that we need to subscribe to is one who expends his time and resources in derailing the economic growth of a nation.

For aren’t they not anti-nationals all those who burn effigies, stop traffic and hold up trains, sit in dharnas and kill and loot and plunder in the name of protecting, preserving, protecting, upholding some abstract dinosaur like values so very absolutely anachronistic in today’s jet age?

pursuit of education, a pursuit that would not just shore up their intellectual wealth but also help them bag jobs and ultimately lift this country out of the economic morass that it has fallen into?

It is a question that needs answering; not just by the innocent lambs who are systematically led to slaughter by their political self serving selfish political masters but by all right thinking national loving citizens of this country.

And the answers need to come, fast and quick, for I am afraid, the time is running out.