My name is ASIFA. It’s OK: Go ahead and take my name.

For, I am not a survivor.

Anyways how does it matter to me now that i am no more.

I don;t even have the right to feel ashamed.

And why should I?

In fact those who should feel ashamed, those whose names you must know and memorize are my assaulters, the inhuman vile creatures who kidnapped, raped, beat me black and blue, and then dumped my lifeless body onto the streets after they had their fill of me, of my guileless eight year old self.

And do you know among these ‘animals’ were a temple priest, someone who purportedly acts as our Messenger of God?

Also a couple of policemen, whose duty it is to uphold the law? 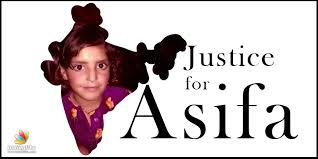 m in their despicable bestial acts were a few other moralistic keepers of conscience, those self styled torch bearers of society and religion and caste and other myriad affiliations who thought it was Ok to violate and rape and murder an innocent eight year old. AS if it were the done thing to do, some sort of a birthright.

In fact so vile did they act that even moments before I breathed my last, I heard one of my tormentors scream out maddeningly __‘once more, one more time.‘
And so he had ‘one for the road’ before I was thrown on the road where I died a million deaths before death came and freed me of my pain and humiliation.

And now you can move on to the next big story, the next big rape for I am but Asifa, a poor, unfortunate eight year old girl who died in ‘service’, while serving the carnal instincts of men badly raised by their mothers and fathers and the society to which they belong.

Thank You, dear India for treating me this way.