TONIGHT THE MOON’S MINE 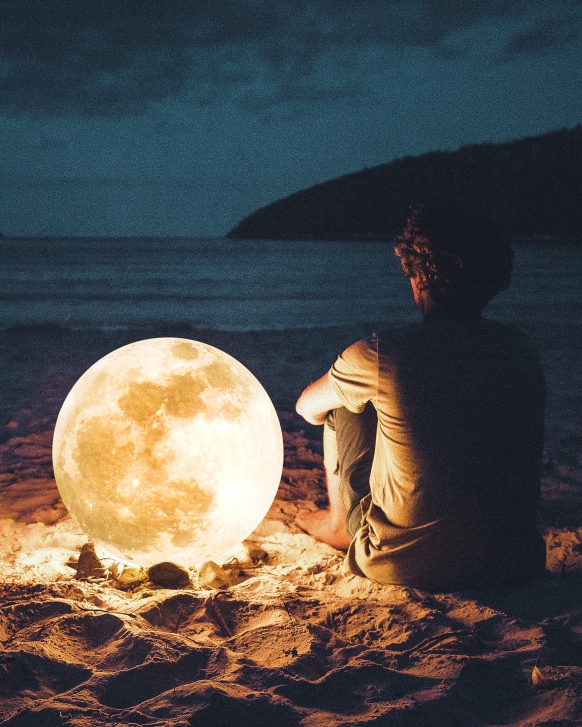 For a long time Venkat sat there, by the shore, motionless and emotionless, his tiny hands clasped tightly together as the waves crashed onto the rocky edges, each thunderous splash lathering his bare torso, drenching him with whatever the angry sea brought in__bile, froth, and salt working as a coolant all over his puny body.

Then, slowly, as the waters turned slightly warmer, he opened his eyes and gazed at his reflection on the waters below.

His face, come alive in the full moon’s golden streaks, had turned a flotilla of reddish orange. But it was the eyes that held his attention as he peered into them, the eyeballs, twinkling brighter than the brightest star, two floating dots in a mass of fluid.

It was then that he realised the full import of what he had done.

And with that came what he thought he had buried in the deepest recesses of his scarred mind__the memories, the horrendously mind shattering memories.

Like some monstrous unhinged ill formed sea creature, it came, the very same memories that stuck to his soul like and crisscrossed past his battered mindscape in all those horror filled sleepless nights of yore.

One among them persisted and bounced back, repeatedly smashing against the half broken edges of his mind, leading him to ultimately break into a long, heart wrenching cry whose virulence ricocheted off the rocks that abutted him, crashing into the sea with a dissonance that stayed afloat for what seemed like eternity.

It was the dead of night and he was in his room, a small dank and smelly doorless tin shed. He felt someone sliding up to him, first a hand, then the legs moving all over him, the lips, the mouth taken over by some brute force and seconds after began the hour long brutal crushing down of his dignity or whatever remained of it.

The sea hissed along angrily as another memory followed.

This time he had a knife in his hand and he was plunging it deep into his employer’s heart. He didn’t know how long he bored it down the man’s chest but he stopped only when there was pin drop silence and the only sound he could hear was that of his own self, his petrified heart beating faster than it had ever in the fourteen odd years of his sodden existence on this planet.

A light glowed in the dark, lighting up the horizon beyond the waters. He knew what it meant. It was time for the boat’s arrival. He had watched it every single night from the netted iron bars of his factory, the soap factory that was his home from the time he was four, bought and brought here to serve his master in more ways than one.

This was his first outing ever, the first time he had ventured out alone.

He looked upto at the sky and the twinkling stars. He had never seen the sun.

It was time he did; the moon would guide him to it.