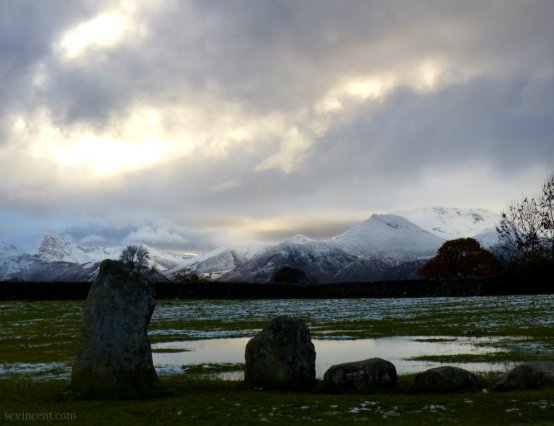 The sky is a bluish white spread, white empty of all dark clouds. From behind the snow capped mountain peaks the sun peeps in and begins to shower its slow brilliance on the wind swept landscapes below. The tall cinder trees that abut the lake come alive with the twittering tales of birds and bees.

Safely ensconced atop his throne, an oblong monolithic stone kissing the edges of the moss filled dampness around him, Vikram watches Nature’s munificence unfold in spectacular glory, his still bleary eyes slowly crawling out of the stupor induced by the previous night’s indulgence.

Alcohol and deer meat any day is a deadly cocktail.  Top that with marijuana! Ah! The night of debauchery would be a never ending one.

His lips curl up into a smile that spirals all the way like water bubbles to either edges of his pock marked angular face, the almond shaped eyes suddenly popping bright at the memory of it all.

It’s the start of yet another perfect day, or so it seems.

Life’s good so far, he surmised.
The past six months had been great for him. He had wiped off all his enemies, importantly Abdul Quadir, his acolyte turned arch rival; the only one who had the daring plus the guile to outwit him and take control of Bawana Outer, the 100 kilometere square stretch of urban landmass bordering Delhi, the national capital that fetched him an annual income of over Rs 100 crores.

That kind of money didn’t come easy. The last year he had seen more corpses than in his entire four score life.

The last of his enemies had been laid to rest and he had taken a well deserved break and was enjoying the fruits of his success in the lap of the Himalayas, his go to place__for peace, for reflection, for rejuvenation.

For his death. His reflexes were a tad late. By the time he sniffed a human voice around him and turned around, his hands reaching for his loaded AK 47, the bullet had smashed through his skull__his brains, spilt milk on the floor.

The wheels of revenge had come full circle.

Hosted by Sue Vincent at