Hosted by J Hardy Caroll at 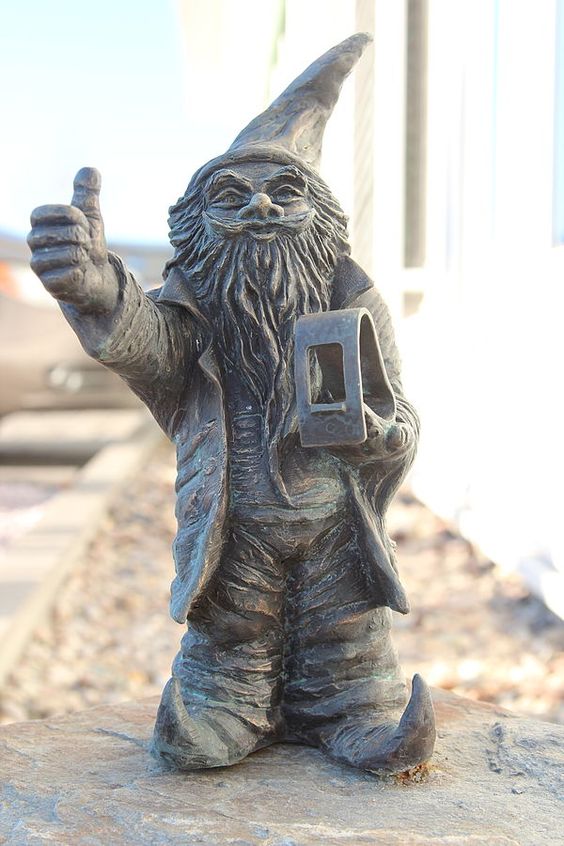 Oscar stared at his partner, his cherubic face breaking into an amused expression.

It had been almost a week since the two University of Florida Fine Arts students had flown into Wroclaw, and all she was interested in were the dwarfs, the cheeky one foot tall miniature cartoonish characters that dotted the ancient’s town landscape.

True, he agreed, they were different__charmingly weird, if not outrightly beautiful.

I mean who wouldn’t like a bronze figurine, barely knee length high, and placed at nondescript places such as behind bushes, bordering sidewalks, alongside river fronts et al; each one of them emblazoned with myriad human expressions that captured the everyday oddities of life.

“Why don’t we visit the Raclawice Panorama,” Albert asked, half hesitantly.

“Isn’t that something to do about the Polish victory over the Russians?”

Al nodded his head in affirmation, adding, “A massive circular painting captures the historical feat is a must see”.

“ I am game,” gushed Sofia, not failing to add, “ But after that I need to resume our “Dwarf Hunting”. There’s still some 75 more to discover”.

Oscar nodded resignedly as the too hopped onto a bus.

Wrocław’s dwarfs (Polish: krasnale, krasnoludki) are small figurines (20-30 cm) that first appeared in the streets of Wrocław, Poland, in 2005. Since then, their numbers have been continually growing, and today they are considered a tourist attraction: those who would like to combine sight-seeing in Wrocław with “Hunting for dwarfs” are offered special brochures with a map[1] and mobile application software for smartphones.[2] As of 2015, there are over 350 dwarfs spread all over the city. Six of them are located outside the city at the LG plant in Biskupice Podgórne.

In 2001, to commemorate the Orange Alternative (Polish anti-communist movement), a monument of a dwarf (the movement’s symbol) was officially placed on Świdnicka Street, where the group’s happenings used to take place. It is probably one of the few cases in the world where such a subversive group has been honoured by the city authorities, who commissioned the placing of a statue of a dwarf in the city centre. In 2003, the Mayor of Wrocław, in an attempt to continue the new tradition, unveiled a small plaque on the door of The Dwarfs’ Museum. It can be found at the height of human knees on the wall of a historic tenement called Jaś, which is situated between the Market Square and St. Elizabeth’s Church.

The figures of the dwarfs, which are smaller than the Orange Alternative monument on Świdnicka Street, were placed in different parts of the city. The first five, designed by Tomasz Moczek, a graduate of The Academy of Art and Design in Wrocław, were placed in August 2005. These were the Fencer near the University of Wrocław, the Butcher in Stare Jatki arcade, two Sisyphuses on Świdnicka Street and the Odra-Washer-Dwarf, near Piaskowy Bridge. The name of the last dwarf is related to Pracze Odrzańskie, an estate on the outskirts of the city. Since that time, the number of figures has continued growing.

A ceremony unveiling two other dwarfs took place on the day of June 18, 2008. They were situated on Świdnicka Street, next to W-skers: a dwarf in a wheel chair. The figures represent two disabled dwarfs: the Deaf-mute and the Blind. They are part of the Wrocław Without Barriers campaign, which aims at drawing attention to handicapped people living in Wroclaw. Five days later, at the Hematology and Pediatric Oncology Clinic in Wrocław, another dwarf was erected. It was to be the third female dwarf, Marzenka, whose design was based on the logo of the Mam marzeniecharity.[3]

The Dwarfs Festival takes place in Wrocław every year in September.