BLACK IS BACK AND HOW! 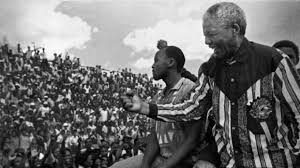 Cliff Andrews elbowed his way ahead, to near the front steps of the Town Hall.

Earlier in the day, Cliff, had flown in from Washington and contacted the ever smiling Des, whose darkish features lit up like a 400 watt bulb, the  black button eyes shining like diamonds in the dark, on being told about the assignment.

“Des, this is big. The guy’s back from prison. Get some close ups. Really tight, buddy. We need to catch him in action, ” were the last bits of advice the senior newsman manning the Africa desk of the New York Times handed out before the two stepped out of the nondescript third floor hotel room and into the mid summer madness that had enveloped all of Pretoria.

Four hours later, back in his hotel room, Cliff’s Remington typewriter banged out the words, “The ANC tri-colour flew high in Cape Town today, the black at its top defiantly jutting out into the dark African sky. The fight for freedom is not yet over; it’s just begun, so said Nelson Mandela who looked …”

From racial segregation to global inspiration

Nelson Mandela lived one of the most remarkable lives of the 20th Century. Born in an era of racial segregation and oppression in South Africa, he made it his life’s mission to fight for an equal and democratic society in his country.

After 27 years in jail, Mandela helped prevent civil war and became South Africa’s first black president. By the time of his death he’d become a renowned statesman and global icon. Discover how Mandela went from prison cell to presidential office.

For more information you may click on this link http://www.bbc.co.uk/timelines/ztd26sg