Feel free to stroll around the area using the Google street view and grab any picture you choose to include in your post. 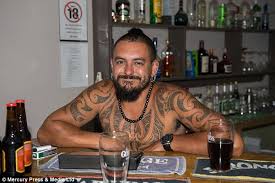 It looked any moment he would suffer a paralytic attack.

The septuagenarian steadied himself against the stands as Judge Malcolm Hartford’s gravel voice ricocheted off the domed walls of the makeshift courtroom.

“I hereby pronounce the accused guilty of six charges of under age sex.”

Outside, a motley crowd listened to a doughty woman’s harangue.

“This should never have taken place,” she thundered. “The Pitcairns have been bullied. Ours is a sex culture. It’s consensual. We sleep, eat, drink, and cohabitate with our own, age be dammed!”

Thrusting her face towards the TV cameras, she bellowed, “How else would two men, 11 women, and a young girl have survived and grown to 50 and beyond? Yes, we share our men, for our comfort, for procreation, for survival. And fuck the goddammed all knowing prudes who throw us the rule book, quote the Scriptures, and decide upon what’s moral and what’s not.”

On 30 September 2004, seven men living on Pitcairn Island (including Steve Christian, the mayor, and representing a third of the male population of the island) went on trial facing 55 charges relating to sexual offences. On 24 October, all but one of the defendants were found guilty on at least some of the charges.[1][2][3] Another six men living abroad, including Shawn Christian, the current mayor of Pitcairn, were tried on 41 charges in a separate trial in Auckland, New Zealand, in 2005.