Spread eagled on the velvety master bed in the fourteenth floor ultra chic Hilton Hotel suite, Fidel watches his lady love with wide eyed admiration before saying, “If you are here to kill me, here take my pistol, sweetheart.”

Shock and fear drains out the colour on Lorenz’s face that not very long lit up catwalks around the world as its embarrassed owner, first stares at the tiny charcoal black Glock 29 that lay on the floor in front of her and then flings herself into Castro’s arms exclaiming, “Forgive me, my love, I have been misled.”

Ilona Marita Lorenz (born August 18, 1939) is a German-born American woman who had an affair with Fidel Castro in 1959 and in January 1960 was involved in an assassination attempt by the CIA on Castro’s life. 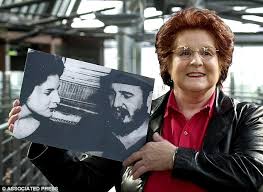 In the 1970s and 1980s, she testified about the John F. Kennedy assassination, stating that she was involved with a group of anti-Cuban militants, Frank Sturgis of the CIA, and E. Howard Hunt of CIA and Watergate infamy shortly before the assassination.

In February 1959, weeks after the conclusion of the Cuban Revolution, Lorenz arrived in Havana with her father on board of the MS Berlin.[3] Fidel Castro and his men visited the ship and the Máximo Líder took a liking to the nineteen-year-old girl. She stayed in Havana, lived with Castro for several months and became pregnant. She underwent an abortion in the 7th month of pregnancy. She claims it was forced on her, while one of Castro’s assistants claims that she wanted it.[4]

She left the island and joined anti-Castro activists in Florida. Her later testimony named Francisco Fiorini as the CIA agent who recruited her to assassinate Castro, and that this was an alias for Frank Fiorini Sturgis. She received poison pills that she was to put in Castro’s food. Back in Cuba in 1960, she did not deliver the pills but told Castro about the plot, claiming that she still loved him.[4] She left the island and visited Castro one last time in 1981.

According to Lorenz, in March 1961 she met deposed Venezuelan dictator Marcos Pérez Jiménez, introduced to her as “General Diaz”, at a residence in Miami Beach, Florida while working as a courier for the International Anti-Communist Brigade.[5] She said she was to collect a $200,000 contribution from Pérez Jiménez for her group.[5] Lorenz said: “He chased me around for six weeks.”[5]

Lorenz claimed that Castro and Pérez Jiménez each fathered a child with her.[5]

In August 1963, a paternity suit Lorenz filed against Pérez Jiménez briefly held up his extradition to Venezuela.