Even a mere stretching of the toes proves a Herculean task, closeted as he is inside the three by two feet long iron box.

It’s been a little under eight hours since the senior British Army Officer’s confinement; barely less than a day since his arrival at this remote forested Burmese camp; and less than a month since his capture by the Japanese Army.

The POW squints his eyes and peeps through the slight slit.

All he can make out are the swollen, puss filled ankles of fellow prisoners, as they push, shove, and shuffle forward under the watchful eyes of Japanese troops.

A memory from last night snaps to attention.

He, alongwith other POWs, alights the night train. 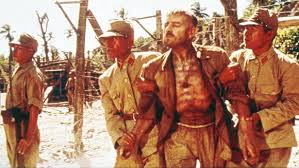 “I am Colonel Saito of  the Imperial Japanese Army. You’ll build a bridge across the river. Cut stones, fell trees, lift objects, burrow tunnels…all this and more…hard manual labour…come rain or shine. Do you understand?”

“I object. I’m a British Officer. Under the General Convention rules…”

“The butt of the rifle smashes into his skull.

Inside his steel cell, escape is all Nicholson thinks about.

The Burma Railway, also known as the Death Railway, the Burma–Siam Railway, the Thailand–Burma Railway and similar names, was a 415-kilometre (258 mi) railway between Ban Pong, Thailand, and Thanbyuzayat, Burma, built by the Empire of Japan in 1943 to support its forces in the Burma campaign of World War II. This railway completed the rail link between Bangkok, Thailand and Rangoon, Burma (now Yangon). The line was closed in 1947, but the section between Nong Pla Duk and Nam Tok was reopened ten years later in 1957.[1]

Forced labour was used in its construction. More than 180,000—possibly many more—Southeast Asian civilian labourers (Romusha) and 60,000 Allied prisoners of war (POWs) worked on the railway. Javanese, Malayan Tamils of Indian origin, Burmese, Chinese, Thai and other Southeast Asians, forcibly drafted by the Imperial Japanese Army to work on the railway, died in its construction — including 100,000 Tamils alone.[better source needed][2][3] 12,621 Allied POWs died during the construction. The dead POWs included 6,904 British personnel, 2,802 Australians, 2,782 Dutch, and 133 Americans.[4]

After the end of World War II, 111 Japanese military officials were tried for war crimes because of their brutalization of POWs during the construction of the railway, with 32 of these sentenced to death.[5] No compensation or reparations have been provided to Southeast Asian victims.

The Bridge on the River Kwai

The Bridge on the River Kwai is a 1957 British-American epic war film directed by David Lean and starring William Holden, Jack Hawkins, Alec Guinness, and Sessue Hayakawa. Based on the novel Le Pont de la Rivière Kwai (1952) by Pierre Boulle, the film is a work of fiction, but borrows the construction of the Burma Railway in 1942–1943 for its historical setting. The movie was filmed in Ceylon (now Sri Lanka). The bridge in the film was near Kitulgala.

Carl Foreman was the initial screenwriter, but Lean replaced him with Michael Wilson. Both writers had to work in secret, as they were on the Hollywood blacklist and had fled to England in order to continue working. As a result, Boulle (who did not speak English) was credited and received the Academy Award for Best Adapted Screenplay; many years later, Foreman and Wilson posthumously received the Academy Award.[3]

The film was widely praised, winning seven Academy Awards (including Best Picture) at the 30th Academy Awards. In 1997, the film was deemed “culturally, historically, or aesthetically significant” and selected for preservation in the National Film Registry by the United States Library of Congress. It has been listed among the best American films ever made by the American Film Institute.[4][5] In 1999, the British Film Institute voted The Bridge on the River Kwai the 11th greatest British film of the 20th Century.