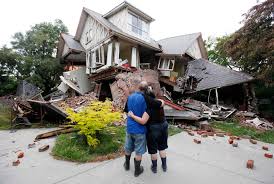 Inder looked at Lisa and his heart sank.

The two had spent a sleepless 48 hours, rummaging through town, hunting every square inch of space, walking upto strangers, inquiring, probing, requesting, cajoling, once even threatening__ all with the sole intention to search down her mother who had gone missing ever since the earthquake struck Christchurch.

He cleared his throat to say something but found himself struggling.

From across the table he reached out and held her hands.

She dropped a tear onto his palm.

He came over, held her up, and walked the two out of the roadside shack.

Outside, grief lay plastered on every human face.

The duo stumbled past desolate streets littered with sky high buildings now turned to dust, the earth an ugly mass of rotting human flesh and abutting it the carcasses of animals and birds.

An earthquake occurred in Christchurch on 22 February 2011 at 12:51 p.m. local time (23:51 21 February UTC) and registered 6.3 on the Richter scale.[1][9] The earthquake struck the Canterbury Region in New Zealand’s South Island[1][10] and was centred 2 kilometres (1.2 mi) west of the port town of Lyttelton, and 10 kilometres (6 mi) south-east of the centre of Christchurch, at the time New Zealand’s second-most populous city.[1] The earthquake caused widespread damage across Christchurch, killing 185 people[6][7] in the nation’s fifth-deadliest natural disaster.