Standing outside the church gates, the man watched the vehicle speed away, spewing fumes into the June summer air.

He heaved a sigh of relief and walked back inside.

That was one more abandoned girl married off.

His cataract laid eyes caught a ray of light. He looked up at the balcony’s lantern whose glares lighted the arched stained glass windows.

His world lay inside those windows.

A world of prayers, of hopes, and of mercy.

Mercy? A kind word, a Christian word, a word of salvation, a word

that he had heard, read out, and even delivered over a thousand times on behalf of the Lord__the lord he served.

But does he deserve it? Does he, Reverend Father Agnes Immanuel John, head priest of South Kolkata Diocese Church, guilty of first raping and then fathering, and later abandoning a  poor orphan girl and her new born__their child; his own; a daughter__, more than a quarter century ago, deserve mercy? Deserve any mercy at all?

The question tormented him every waking hour and much like a wild rodent rat gnawing away at a nut, the guilt had scraped clear the insides of his tortured soul.

Enough is enough, he resolved. He couldn’t take the load anymore. At seventy-five he deserved at least that.

He raced past the main door, climbed the stairway that led to his inner chamber and locked himself in.

Seconds later the stillness of the night was interrupted by the loud burst of a single gun shot.

Use the image above to create a post on your own blog… poetry, prose, humour… light or dark, whatever you choose, by noon (GMT)  Wednesday 25th January and link back to this post with a pingback. Please make sure that the pingback works and if not, copy and paste your link into the comments section of this post. 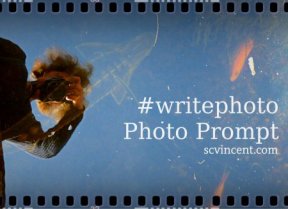